Paid Social Media Jobs – But you end up paying!

She’s so good at it (apparently) that she’s going to “take you right by the hand” (her words – not ours!) and “show you everything you need to get started making money from your own home as soon as TONIGHT.”

We went through the process by registering our name and email address. We were immediately forwarded on to the next page of the website which starts to tell you all about how great it is to work from home, how many high-paying jobs they have available and how anyone can do the work.

Annie is even so nice that she says “once you start making money with social media jobs that you pass it on and help someone else start doing the same!”

Sounds too good to be true, Annie…

Most people would think that Annie sharing her knowledge on how you can work from home doing jobs on Social Media would be good enough, but not Annie!

Then comes the payment request

Unfortunately, even though Annie said all she wants is that once you start to make money you just “pass it on and help someone else” the real person Annie wants you to help is – herself!

We know this because the next part of the website is where she asks for money.

Unless you go to close the website, in which case Annie reduces the cost to just $17. It’s almost as if she knows you’ve discovered her “job” is a scam and decides to have one last go at convincing you.

There is some good news though. If you do want to be scammed, Annie is so nice that she tells you that even if it’s 2am in the morning you can still pay her the joining fee! How good of her! 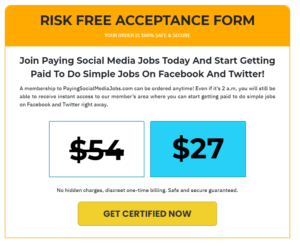 Hang on – there’s reviews so it must be legitimate?

Just before and after the payment request there’s some video reviews. Unfortunately we can’t find the actors online, but trust us – they’re actors. So don’t believe the reviews – they’re fake!

Anyway, back to the payment request

After watching the fake reviews, Annie goes back to explaining why there’s a cost with getting this job. Even writing that sentence doesn’t sound right. There’s a “cost” with a “job”.

That really should be the biggest red flag going and total proof that this “job” isn’t actually a job. It’s a scam. You should never pay money to have a job! Ever.

But Annie see’s it differently. She says that because they don’t take a percentage of your earnings they have to charge a very small fee to cover their costs, but to sweeten the deal for you she’ll give you $50 once you complete your first paid social media job.

For a split second we did consider that Annie might be telling the truth. That maybe they do charge just for putting you in touch with companies who will hire you. And maybe they do just charge for their webhosting costs in order to show you the job. After all, running a website isn’t free.

Unfortunately, it gets worse…

From reading real reviews from other people who had fallen for the scam one thing becomes clear. The scam doesn’t stop at the first amount of money.

You see, what happens next is truly sickening.

If you do pay to get the information about the jobs, you’re then asked to pay MORE money upfront for every job you want to apply with. Which effectively makes it a never ending circle of paying money to work.

OK, so I pay money to start and money for jobs, what’s next?

Only then do you get actual work to complete. So maybe now it’s possible to make some money right?

What the work actually involves is insane. Tasks such as getting 1 million Facebook likes in a week. Or getting 50,000 Instagram followers in a day. If you don’t achieve the tasks you don’t get paid which makes it impossible work and designed so that you fail and ultimately never get paid.

Also, although we can’t prove this, we’re pretty sure the image of “Annie Jones” is a stock image. We doubt Annie Jones even exists.

Just avoid this job entirely. It’s a scam and you’ll only lose time and money.

Quality Rating – You’re paying for information about jobs that are impossible to complete. Pointless!

Availability Rating – Easy to get started with, even at 2 in the morning but we still give it a low rating because of WHAT you are getting started with!

Support Rating – From what we’ve read once they’ve got your money you’ll never hear from them again!

Leave A Review About This Company